Backstory is also called exposition, which literally means telling. I hate to be the bad guy here, but there’s hardly ever (dare I say, NEVER?) a place for backstory in a picture book. Unfortunately, too much backstory is another one of problems I frequently see in the picture book manuscripts I critique.

Let me give you an example of backstory using the well-known nursery rhyme “There Was an Old Woman Who Lived in a Shoe.” 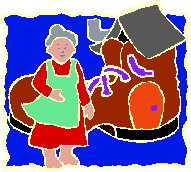 There was an old woman who lived in a shoe.
She had so many children, she didn't know what to do.
She gave them some broth without any bread;
And whipped them all soundly and put them to bed.

Deep in her sole, Mavis contemplated giving the children a tongue lashing. But the tongue of the old shoe house was ripped and cracked, and probably wouldn’t stand up to the abuse. At 85, Mavis had lived inside this shoe for half her life. “We’ll have a real home soon enough,” her cobbler husband had promised for years, but a house never came. Instead, the children came, one after another.
If Mavis, were honest, she would admit that she had lost count of how many children she actually had. Once she had begun her second round of alphabetical names, it all become a blur.
With all these children you would think she could get some help around the shoe, but no. She cooked, cleaned, did the laundry, and the rest of the shoehold chores while those children played ring-around-the-rosey with the shoe laces and peek-a-boo through the eye holes.
It didn’t help matters that today was the twelfth straight day of ninety degree weather, with no rain in sight. The heat index inside the old leather shoe must have been one hundred and ten.
Mavis plodded into the kitchen to prepare dinner for her brood. I have half a mind to serve them broth for dinner, she thought.

Granted, that backstory is interesting, but we seem stuck waiting for something to happen. Backstory often:

In a picture book, backstory can also:
Q Keep the illustrator from telling his/her half of the story
Q Eat up word count

Backstory may be helpful for an author. If you are the author of Mavis’ (aka: The Little Old Woman Who Lived in a Shoe) story, you may need to know all the details about her husband, the composition of the shoe, the number of children she has, Mavis’ age, and so on in order to write a compelling story. But just because you know the backstory, doesn’t mean you have to write it into your story.

Most writing gurus suggest starting in the middle of the action. When it comes to picture books, often the main character and his/her problem is introduced on the first page, or first line. This gets the reader into the story instantly and allows the writer to have plenty of words and pages remaining to build the plot.

It’s Your Turn:
u Look back at your latest picture book manuscript, is there some backstory you can eliminate? If so, get busy!
v Not sure if you have too much backstory? One simple way to find out is to type up your manuscript in the format of a first-page critique. Start the story at the very top of a sheet of paper, and then type in 12-point type, double spaced. When you get to the bottom of the page, stop. Read back over your story. Underline when the character and his/her problem are introduced on the page. Then underline where the first attempt to solve the problem occurs. If you have lines of copy before we know the character and his problem, you probably have backstory. If you have lots of text between the introduction of the character and problem and the first attempt to solve the problem, that’s probably back story, too.

Oh, thank you thank you for writing this! I can't count the number of times I've had to politely explain to an author how little I care about where the main character's mom works or how old his dog is or what his brother likes to eat for breakfast. No one cares. They just don't. Great advice, Rob!

Thanks for this, Rob. It's exactly the problem I had with my new manuscript, and you're so right, once I got rid of the backstory, the whole piece took off.