A Problem with the Problem

Week of July 23, 2012—Common Problems in Picture Book Manuscripts
Monday, July 24—A Problem with the Problem

A problem is the conflict in the story. The conflict is what compels the main character to move through the story from beginning to end. Without conflict, the characters don’t have a reason to do anything, to go anywhere, or (above all) to try to change anything.

A lot of us picture book writers fight against having a problem in our stories. “Can’t a bunny just hop through the woods and enjoy his day?” Well, yes, of course a bunny can do that, but will anyone care? If, however, the bunny is Peter Rabbit and he is in Mr. McGregor’s garden and about to get whacked with a hoe (after Mother told him not to go there in the first place), the reader definitely cares about what is happening. That is how a problem changes a ho-hum story into a work of fiction.

My first real ah-hah about problems and conflicts came when I heard Linda Arms White and Laura Backas talk about the three-act story structure used in television shows. Think of any of your favorite shows when you were growing up:

Every time we tuned into our favorite program, we found the characters we loved with a  new problem to solve. Lucy had spent too much money, baked bread that caused the over to explode, worked in a chocolate factory, stomped grapes, tanked up on too much Vitameatavegamin.

Every Saturday, a new episode would introduce a new problem. I mean how many times would it take that Coyote to figure out he wasn’t going to catch Roadrunner? Of course, Velma and the kids happened to stumble into a new mystery each week. If Fred and Barney didn’t do something stupid to get themselves into some kind of trouble that they had to get out of, would the show have been funny at all? 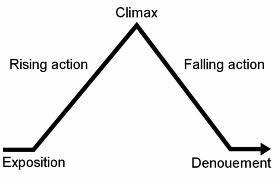 Later, when I started learning about Freytag’s Pyramid, rising action, falling action, and the like, my understanding of trouble and conflict expanded. Soon I started to realize that nearly every picture book had a problem. Look at any Caldecott Award Winning book. Of course, the books on the list won their award for the art, not the story, but you can still find the problems in each one . . . from Make Way for Ducklings to this year’s wordless book A Ball for Daisy to Where the Wild Things Are.

It’s Your Turn:
u Gather up a stack of picture books and find the problem in each one.
v Look at your latest picture manuscripts. What is the problem in each?
w Click on the link above and visit the Picture This! Directory to discover more posts about problems, three-act structure, and Freytag’s Pyramid.
Posted by Rob Sanders at 1:00 AM