It's All About the Story 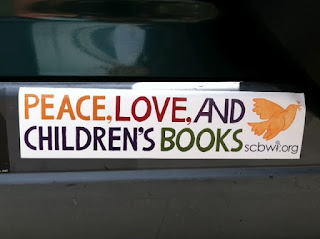 SCBWI handed out these bumper stickers before the pool party in LA,
which was called the Hippie Hop!

Do you remember a few years ago when politicians would say, “It’s the economy, stupid,” as a reminder to focus on the major issue of the time? At SCBWI, LA, this year the saying should have been, “It’s the story, stupid!” (Of course, everyone would have left stupid out of the saying.) Why is it that the most logical thing is often the thing we have to be reminded about? Story. That’s the key.

Arthur Levine, Vice President and Publisher of Arthur A. Levine Books/Scholastic Inc., was the opening keynote speaker and said that our responsibility is to create “books for the ages” and “characters infused with authentic emotion.” Our end goal, according to Arthur, is to “capture a moment of intimacy between author and reader.”

Tim Ditlow, Associate Publisher of Amazon Children’s Books, said, “It’s the coffee, not the cup. Don’t get attached to the format, get attached to the story.” Tim said he always looks for books with good story and doesn’t really even worry about what age group a book is for. If a story answers the questions “Who am I?” and “Where am I going?” then Tim is interested.

Rubin Pfeffer from the East West LiteraryAgency (and my agent) said, “It all depends on story.” An agent or editor has to love a story they are acquiring. According to Rubin, some of things that can make story have appeal include:

Clare Vanderpool, author of Moon Over Manifest and Navigating Early, said we have to balance craft—the “skills we learn”—with creativity—“the ability to bring to existence through art.” Then Clare went on to say, “Craft is only as good as how it impacts your story.” To a writing teacher, that’s a big concept. You can know all the craft in the world and you can put it into use, but if the story isn’t there, what’s the point? Clare also said, “The universe is made up of story . . . Pat attention . . . We all have a need for connection to story.”

A panel of editors gave more details about what to do and not to do when developing stories. The panel was made up of Tamar Brazis, Editorial Director, Abrams Books for Young Readers and Amulet Books; Jordan Brown, Senior Editor, Walden Pond Press and Balzer + Bray at HarperCollins; Laura Godwin, Vice President and Publisher of Henry Holt Books for Younger Readers/Macmillian; Elise Howard, Editor and Publisher, Algonquin Books; Farrin Jacobs, Editorial Director at HarperCollins Children’s Books; and Neal Porter, Editorial Director of Neal Porter Books and Roaring Brook Press/Macmillian. Here’s a summary of the panel’s do’s and don’t’s:

Always remember—it’s all about the story!
Posted by Rob Sanders at 1:00 AM