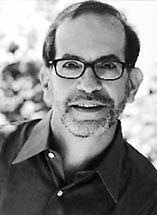 Here’s how the SCBWI program described Leonard Marcus:
“Leonard Marcus is a rare bird—a renowned children’s book authority and an award-winning author for kids. His widely praised books include Dear Genius: The Letters of Ursula Nordstrom; Golden Legacy; Minders of Make-Believe; Margaret Wise Brown; Funny Business; and the forthcoming Annotated Phantom Tollbooth (Knopf, fall 2011). Leonard is a frequent contributor to the New York Times Book Review and writes a regular column on picture books called “Sight Reading” for The Horn Book.”
Leonard led an intensive entitled “Non-Narrative Picture Book” and, yes, it was as phenomenal as you might imagine.
According to Leonard, non-narrative picture books (or concept books) engage the child. Picture books are, by nature, interactive—after all you hold them, turn the pages, point to the pictures, and touch the book. “It doesn’t take novelty items to create interaction,” Leonard said. “Exploit the physicality of the book—it has to become interactive.”
Two idea sources for concept books are litanies and interesting lists. Leonard warned against thinking of concept books as simple. “Don’t think simple,” he said, “think distilled.” In other words you’re distilling—taking away—everything that doesn’t belong in the book. There is nothing simple about the process of distilling.
Concept books may include rhyme. But Leonard warned to not let your rhymes become duty bound. The rhyme must serve a larger purpose and the words you choose to rhyme should be inevitable­—no other word could do. Rhyme should always bring surprise and suspense.
Leonard encouraged us to look at the physical aspects of a book and to think how we could capitalize of those aspects when creating concept books. But remember that while these aspects may amplify the concept in the book, they will also amplify the cost for the publisher. Some things to consider “exploiting” are:
·        The gutter of the book
·        Page size and trim size
·        Shape and length
·        Tall and narrow book shapes
·        Flaps to lift
·        Pop-ups
·        Moveable elements
·        Die cuts
·        Shaped pages
“Remember,” Leonard told us, “every limitation presents opportunities.”
Some examples of stellar concept books (from years past to some soon-to-be-released) that Leonard mentioned during the intensive include:
·        Good Night Moon by Margaret Wise Brown and Clement Hard (still in print after more than 50 years)
·        We’re Going On A Bear Hunt by Michael Rosen and Helen Oxenbury
·        The Noisy Book by Margaret Wise Brown and Leonard Weisgard
·        Swirl by Swirl: Spirals in Nature by Joyce Sidman and Beth Krommes (to be released: October 2011)
·        Press Here by Hervé Tullet
It’s Your Turn!
1. Visit Leonard’s web site at www.leonardmarcus.com to learn more about his books and his remarkable contribution to children’s literature.
Posted by Rob Sanders at 12:30 AM

I love the idea of concept books. My question is this: if you are not an author/illustrator, how do you pitch a concept book in a query letter? In other words, how do you present your ideas w/out TONS of art notes (which I often hear agents/editors do not like to see) explaining your ideas?

If your concept book has few words, but great visuals, what's the best way to query this? Anyone with ideas--please comment!

Well, I'm sure it varies from case to case. My agent grabbed up a concept book from me as soon as he saw it--no art suggestions were included at all. Leonard Marcus said a book like PRESS HERE could have had a dummy made by a writer (after all, it's just dots on a page). Every book will be a different situation, but I think the writer has to write text that can stand on its own for someone to buy it.