Week of July 31—Picture Book Trends—I. C. E. Q.
Tuesday, August 2—C—Character Driven
As we explore trends or characteristics popular in current picture books, we can’t possibly not talk about character-driven books. You can’t go to a conference, read a blog, or pick up a writing journal that doesn’t mention that editors want character-driven picture books. Now most of us are writing manuscripts with characters in them. Our characters are usually what the story is about. So it’s easy to think we’re writing character-driven stories. But not so fast, Grasshopper. Let’s contemplate further what is meant by character-driven.
Yesterday I mentioned a blog post by Jennifer Laughran (http://literaticat.blogspot.com/2011/07/whole-lot-of-info-about-picture-books.html). In that same post, Jennifer said that character-driven picture books feature characters who are “funny, cute, [and] winsome.” (Winsome: sweetly or innocently charming.) Jennifer wants these characters to be ones “that the child reader will relate to—[and] who can have many adventures in the future.” Let me interpret—franchise-able!

Of course, it’s every writer’s dream to have a book that becomes a series and has a host of ancillary products that are associated with it. We all have dreams of retiring on an island living off our royalties. Slow down, Grasshopper. Wise master says: “Future dreams of franchise  can only grow on the strong shoulders of one well-written, character-drive book.”
In a character-driven book, the main character can be a child or something that represents a child (an animal, insect, innocent/naïve adult, and so on).A character-drive story is all about this main character’s wants, dreams, hopes, plans, problems, and more. These are characters the reader/listener comes to care about, root for, and relate to. Let’s look at some examples. 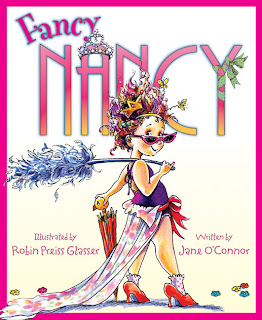 Fancy Nancy
By Jane O’Connor and Robin Preiss Glasser
HarperCollins Publishers
© 2006
People either love or hate Fancy Nancy. I first began to love her when I saw Jane O’Connor on an episode of “Mall Cops: Mall of America” where she was making an appearance to read the book. If you can find the clip, watch it—if you’re like me (that means you have an evil streak that runs through your sweet personality), you’ll be on the floor laughing! So after laughing at Jane O’Connor on “Mall Cops: Mall of America”, I went out and bought Fancy Nancy and brought it home to study.

What I love about Nancy is not so much the character or the fancy, it’s the vocabulary. (As a matter of fact, we’ll be doing a Fancy Nancy Week at our school with kindergartners and first graders to begin to grow “fancy” vocabularies.) But what readers/listeners love is Nancy, the character. Fancy Nancy is a perfect example of a character-drive book. The story definitely centers around the main character, we are intrigued by Nancy, we cautiously watch to see where she is taking us, and when disaster strikes, we empathize with her. Then when her family comes to the rescue and fulfills her most-heartfelt desire (that they be fancy, too), there is a big ah-h-h-h-h-h moment. This is also a perfect example of a character that the author and illustrator could put into other adventures and that was marketable through all kinds of additional products. Can you say retirement on the beach? 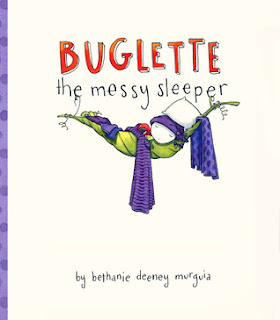 Buglette: The Messy Sleeper
By Bethanie Deeney Murguia
Tricycle Press
© 2011
Buglette is a neat little bug, until she falls asleep and then her bed becomes a mess. She dreams of adventure after adventure and her blanket, pillow, sheets, and blankets become wound up in the dreams (so to speak). Her mother and bug-siblings are none too impressed with her and try to change her messy sleeeping ways. But in the end, it is Buglette’e messiness (and her dreams) that save her bug-siblings from the evil crow. Buglette is a character kids would care about and relate to. She definitely “owns” the story. I can easily see how this character can be involved in other adventures and I see marketability. This is a character-driven book. 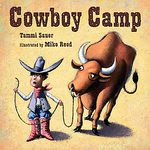 Cowboy Camp
By Tammi Sauer and Mike Reed
Sterling Publishing Co., Inc.
© 2005
An oldie, but a goodie. I just have to get a boy character in the mix somewhere. This was Tammi’s first book and it is such a great lesson in the three-act structure of writing. An Avery is the perfect character. At Cowboy Camp, Avery soon realizes he doesn’t pass mustard as a cowpoke—his name, his clothes, his eating habits, his allergies, and everything else about him makes him feel like a misfit. Immediately the reader can relate to Avery. Who hasn't felt like a misfit? Who hasn’t been in a situation where no matter how hard they tried, they felt they weren’t good enough? The reader is hooked on Avery before we even getting to the climax—the arrival of an evil cowboy who is intent of destroying Cowboy Camp. Suddenly all of Avery’s “problems” become a way to convince the dastardly dude he is at the wrong camp and ultimately to leave. Since we already related to Avery, we now celebrate with him. This is a character-driven book for sure.
Are there other books about Avery? None. Are there some on the horizon? I don’t know. Are there Avery lunchboxes and cowboy hats at Walmart? No, at least not yet. But the book is still character-driven. This is another lesson, Grasshopper—"The value may be in the book itself, with or without anything else. A strong character-driven book may be reward in and of itself."
It’s Your Turn!
1. Explore other character-driven books and see what you can learn from them. Consider:
s The Recess Queen by Alexis O’Neill and Laura Huliska-Beith
s My Name Is Not Isabella and My Name Is Not Alexander by Jennifer Fosberry and Mike Litwin
s Ladybug Girl by David Somar and Jacky Davis
Posted by Rob Sanders at 12:30 AM