Start in the MIddle

Week of July 24—Revision Strategies that Work!
Friday, July 29—Start in the Middle
When I’m critiquing, this is the comment I give most often: “I think the story actually begins here . . .” Then I’ll point to or mark a spot halfway down the page or even on the second page of the manuscript. That’s because some picture book writing greats taught me through conferences and their books that stories often start in the middle of the action. Would you like a real-life example? I can still give a perfect example from a children’s literary classic—Charlotte’s Web. Not a picture book, I know, but the example is so powerful it will help any author no matter what genre he/she writes.

E.B. White
According to Barry Lane in his book How Do You Teaching Writing (pages 144-145), E.B. White’s early drafts of the beginning of Charlotte’s Web were nothing like we’ve come to know in the book and the numerous movie versions. Take a look . . . 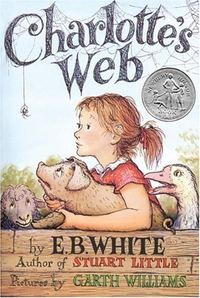 EARLY DRAFT:
A barn can have a horse in it and a barn can have a cow in it, and a barn can have a hen scratching in the chaff and swallows flyin’ in and out through the door—but if a barn hasn’t got a pig in it, it is hardly worth talking about.
LATER DRAFT:
Charlotte was a big, gray spider who lived in the doorway of a barn. She was about the size of a gumdrop and she had eight legs and plenty of tricks up her sleeves.
Now consider the actual published beginning of Charlotte’s Web:
“Where’s Papa going with that ax?” said Fern to her mother as they were setting the table for breakfast. 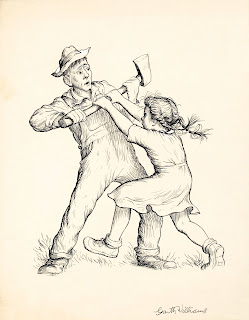 So what changed about the beginning? E.B. White started in the middle of the action. He did away with the backstory, the lead up, and the character and setting descriptions. He plunged us into the center of the action, and as a reader we’re wondering right along with Fern, “Where’s he going with that ax?” The problem is already established (though we don’t realize it). Fern’s role as protector of Wilber is established. The practicality of the farmer father is established, also. And it only took 19 words!
As a writing teacher kids often write what is called a bed-to-bed story. You’ve seen them. Perhaps the kid is writing about going to Busch Gardens (our local amusement park) and the story beginnings with getting up the morning and ends with going to bed and a little tiny bit in the middle might be about Busch Gardens. Something like this:
Ringggg. Ringggg. Ringggg. I turned off my alarm and got out of bed. I washed my face and combed my hair. The I called to the kitchen, “What’s for breakfast?” Since no one answered, I walked to the kitchen and fixed a bowl of cereal. Trix is my favorite cereal and Cocoa Puffs is a close second. I like the way the pieces of Trix explode in my mouth and don’t get soggy in milk. After I ate my Trix and slurped the milk from the bowl¸ I rinsed my bowl out and put it in the dishwasher. I headed to the bathroom for my morning shower . . .”
What a sad waste of words and good writing ability (not to mention pencil lead).
My normal reaction to the kid is this (said with dramatic flare): “Who cares? I thought we were going to Busch Gardens. What’s the most fun thing to do at Busch Gardens?” The answer is ALWAYS SheiKra (a rollercoaster). So, I say: “Ok, great. So what do you do as soon as you get to Busch Gardens? The kid will say something like: “I yell, ‘Let’s ride SheiKra!’” And I will dramatically scream while jumping up and down (you think I’m kidding, but I’m not), “THAT’S IT! THAT’S WHERE THE STORY BEGINS! WRITE THAT! HURRY! WRITE IT BEFORE WE FORGET! Now tell me all about SheiKra.”
All writers need a pesky little writing teacher on one shoulder who keeps saying, “Who cares? What’s the best part? Start there!” That’s the revision voice we each have to develop. Yes, our critique group members can be that voice for us. But eventually, we have to take on the responsibility for ourselves. (Once one of my students masters one skill, then I know he/she is ready for another. Isn’t the same true for us as writers?)
To further illustrate starting in the middle, I’ve pulled some picture books from my shelves to drive home the point. I’ve chosen books that were Caldecott medal or honor books in years gone by. 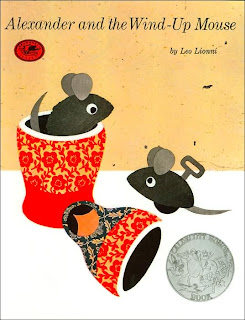 “Help! Help! A mouse!” There was a scream. Then a crash. Cups, saucers, and spoons were flying in all directions.
Alexander ran for his hole as fast as his little legs would carry him.
From: Alexander and the Wind-Up Mouse by Leo Lionni
I had a new horn and a paper hat.
And I went for a walk in the forest.
From: In the Forest by Marie Hall Ets 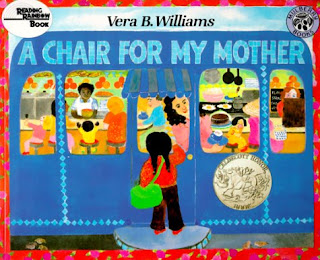 My mother works as a waitress in the Blue Tile Diner. After school sometimes I go to meet her there. Then her boss Josephine gives me a job too.
From: A Chair for My Mother by Vera B. Williams 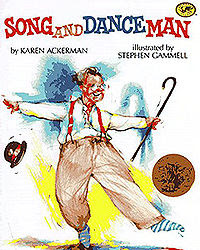 Grandpa was a song and dance man who once dance on the vaudeville stage.
When we visit, he tells us about a time before people watched TV, back in the good old days, the song and dance days.
From: Song and Dance Man by Karen Ackerman and Stephen Gammell
Does every book begin in the middle? No. Does every book need to begin in the middle? No. But if you master this revision strategy you’ll be able to purposefully start in the middle of the action when a story demands it. And you’ll be able to revise your writing to start readers on the journey of your story as soon as they read the first page.
It’s Your Turn!
1. Now gather some of your favorite picture books. Read the opening lines of each. Sort out the stories that begin in the middle of the action from those that don’t. Then study the ones that started in the middle. Put this revision strategy in your box of writing tools and you’ll be further down your writing road.
Posted by Rob Sanders at 12:30 AM