Week of May 29, 2011—Lessons from My Mentors
Friday, June 3—Finding Your Passion
Joyce Sweeney is our guest blogger today. Twenty five years ago, Joyce was struggling to become a published author. Now she has published fourteen books and times have changed. Fifteen years ago she started teaching writing classes and found her true calling. Even more than writing itself, she loves helping and mentoring writers. Visit Joyce’s web site at www.joycesweeney.com. 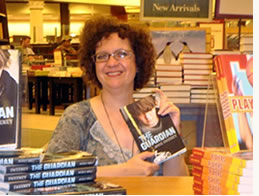 First off, thanks Rob for inviting me to be part of your blog. It's the coolest!  Okay, about me? Well, thirty or so years ago I got the crazy idea to try and be a writer . . . magically (after a decade or so of backbreaking, heartbreaking labor) I had my first young adult novel published by Delacorte Press. So I spent the next fifteen years or so being a young adult novelist, but something was missing.
Turned out I should have remembered the aptitude test I took in second grade that told me “Teaching, counseling, social work” was my true calling.  I remember ripping that result up . . . because I wanted to be a writer, not a teacher. Oh, but the aptitude tests are never wrong. Much as it was very, very fun to be a novelist and get fan letters from actual kids (!!!!!!) something was missing. There was a hole. And when someone asked me if I wanted to teach a five-week class in creative writing, the empty space in me started yelling, “That's it! That's it!”
I taught those library classes for a while, but then I realized this sad fact: people did so much work in those five weeks . . . but then I'd check back with them and they'd say, “Well I haven't done much since your  class.” Clearly something major had to happen. So in 1994, I started my first ongoing workshop, brilliantly named “The Thursday Group.”
To set the bar for myself I checked in with my mentor, Daniel Keyes who taught creative writing at Ohio University. “How many people of yours got actually published?” I asked. “You were it,” he said. “Excellent,” I thought. “If I get two people published I can beat Daniel Keyes' record!
So we got to work.
In 1996, we got the first person published. Nora Wald, who now publishes mysteries under the name Nora Charles. Then, in 1997, we got two more! Leaving Daniel Keyes in the dust, we got five more people published the following year. I started to think I had something here! The technique was simple . . . I just never let people give up. They had to move away or hide from me to fail.
The year of the seven people we instituted the Magic Beans and Magic Bean ceremony. Using guanacaste seeds smuggled in from Costa Rica . . . we drummed, rattled, celebrated and gave a magic bean to all seven published members. It was epic. A few years later, talented people were breaking down my door and I created “The Wednesday Group” and finally “The Tuesday Group.”  We now have 29 people published authors . . . including the amazing ROB SANDERS.Those published include poets, memoirists, children's book writers, mystery writers, you name it. (NOTE FROM ROB: As of last week, published author number 32 had been added to Joyce’s list!)
But still...there were other worlds to be conquered. I met Jamie Morris two years ago and together we brainstormed and created THE NEXT LEVEL workshops . . . weekend craft intensives where we combine everything we can think of in one weekend of non-stop work and fun . . . until the participants are forced to have a breakthrough. As Rob well knows . . .it's intense . . . but it really works. We teach, we write together, we write separately, we counsel. We eat, we drink, we talk, and then we write some more. In three days, participants have usually surpassed their expectations and ours. It's a beautiful thing. So now I can teach people from all over the world . . . in our next workshop on the topic of memoir we have people coming in to Fort Lauderdale from such diverse locations as Las Vegas, Nicaragua and Canada. And I'm not tired yet.
So if you need a mentor you can check out my website www.joycesweeney.com for more info.
It’s Your Turn! (from Rob)
1. I’ve been waiting for the just-right time to share this post. Now is the time. What I take away from Joyce is find your passion and follow it. I have a friend who after working in an administrative job realized teaching is really his passion. Go for it! I have a writing friend who feels that pursuing her poetry may be her passion more than picture books. Do it! I have a cousin who feels an aching need to write—she feels passionate about it. Now is the time! If you’re lucky enough to know what your passionate about, for heaven’s sake, follow your passion!
Posted by Rob Sanders at 12:30 AM

Truly inspirational Rob! you made me want to put down my paintbrush and grab my keyboard!!! I envy your opportunity to work with Joyce, she's a real go-getter!!! I'm on my way to her website now! Thanks for another great post my friend. :0)