Week of March 20—Language Play for Lively Writing
Wednesday, March 23—Personification—Giving legs to words!
According to Dictionary.com:
per·son·i·fi·ca·tion
/pərˌsɒnəfɪˈkeɪʃən/ Show Spelled[per-son-uh-fi-key-shuhn]
–noun
1.
the attribution of a personal nature or character to inanimate objects or abstract notions, especially as a rhetorical figure.
The Robfinition of personification: Giving human characteristics to non-humans things/objects.
CAUTION: Personification does not include giving human characteristics to animals. Giving human characteristics to animals is called anthropomorphism (which we’ll deal with another time).
Personification is another craft technique that is frequently used in picture books. It is also a writing craft kids can and do use in their own writing because it's so fun. Here’s a little poem I use when introducing personification to my students. Hopefully it will make the concept crystal clear for you, too.
The Car
Hear the car motor groan in the morning.
Coughing and spitting when it finally starts.
The car grumbles about another day on the busy highway.
And then breathes a sigh of relief when it reaches its final destination.
By Mr. Sanders
Okay, okay, okay . . . it won’t win any awards, but it demonstrates the point. Usually when I share this poem with kids say they immeditately say, “Oh, yeah. I know how to do that” and we launch into mentor texts that show us how professional authors use personification in their writing. So, let’s do that, too. 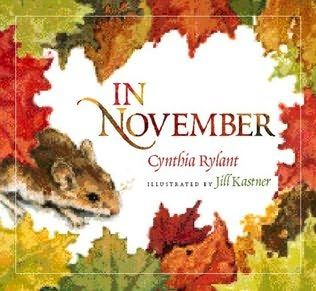 In November, the trees are standing all sticks and bones. Without their leaves, how lovely they are, spreading their arms like dancers. They know it is time to be still.
From: In November by Cynthia Rylant and Jill Kastner, p. 8 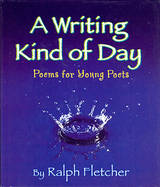 I threw a wicked block on that sentence
that knocked him into the next paragraph
and dislocated three compound words.
Verbs cracked! Nouns splintered!
That big sentence splintered,
Til. Only. Fragments. Were. Left!
From: A Writing Kind of Day: Poems for Young Poets by Ralph Fletcher and April Ward, p. 13 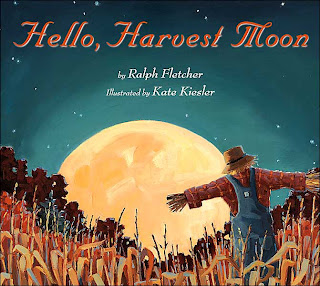 Finally, it [the Harvest Moon] starts to ease lower . . .
. . . sprinkling silver coins
like a careless millionaire
over ponds, lakes, and seas,
till all the money is spent.
From: Hello, Harvest Moon by Ralph Fletcher and Kate Kiesler, p. 31
My students usually begin their personification writing in isolation--writing about one object for example. When they are familiar with the craft they can work it more easily into their writing. The same could be true for you. Play with personification, get comfortable with it, and then you'll find opportunities to work it into your writing.

Ok, let me show you examples of what student writers do when first playing with personification.
My Backpack
My backpack tags along with me to school every day.
My backpack huffs and puffs while it carries all my things.
It makes a happy sigh when I go to sleep.
By Deja
The Keys
The keys run around the ring.
The clinking keys sang a pretty song.
The keys play around the ring.
By Jasmine
The Trash Can
The trash can swallowed my paper.
The trash can’s stomach was full of paper.
The trash can spit out paper onto the floor.
By Armonie
It’s Your Turn!
1. Choose an object to personify. (Perhaps an object around your house such as the bed, computer, refrigerator, or sofa.)
2.Write three or four personification statements about the object.
3.Ok, my friend, you have now created a personification poem! Perhaps you've even got a seed idea for a new piece of writing.
4. Play with personification today. And if you’re inspired, share some of your creations by adding them as comments to this post.
Posted by Rob Sanders at 12:30 AM

Anbarasan14 said...
This comment has been removed by a blog administrator.
1:42 AM

Riya Raj said...
This comment has been removed by a blog administrator.
7:49 AM

Thanks for sharing excellent information. Soulblu