Onomatopoeias--I love the sound of it!

Week of March 20—Language Play for Lively Writing
Monday, March 21—Onomatopoeias—I love the sound of it!
I’ve been planning this week of blog posts for some time now. Several more pressing topics came up and so I put word play (which might also be called literary devices) on the back burner. Last week, while still pondering when to launch into this blog series, I ordered a new Ralph Fletcher book designed for writing teachers. I quickly realized that the book, Pyrotechnics on the Page: Playful Craft That Sparks Writing, was just what I needed to finally move these posts from my brain to the computer. Fletcher writes:
I am defining pyrotechnics as deliberate playfulness with language used by writers to create a particular kind of effect as well as the specific tools used to create that effect. This term includes but is not limited to the following:
P puns and double meanings
P invented words
P allusions
P expressions and idioms
P metaphors and similes
P hyperbole
P onomatopoeia
P alliteration
Pyrotechnics on the Page: Playful Craft That Sparks Writing, by Ralph Fletcher, p. 3
Today we’ll begin our word play with onomatopoeia. As a writing teacher I never teach a lesson on onomatopoeias. Why? Because making sound effects usually comes naturally to children and doesn’t have to be taught. They give sounds to everything—burps, cars, thunder, and more. That natural interest in sounds is a clue to us as writers. If we use them, they will enjoy! Usually if I just model using an onomatopoeia in my writing (no matter what the craft being taught), kids will start adding sounds left and right. 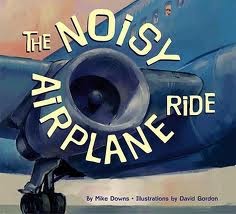 Onomatopoeias in their purest form are sound effects. The Noisy Airplane Ride by Mike Dawns and David Gordon contains perfect examples:
STOMP, STOMP, TROMP
WUSSHHH
CHUG, CHUG
RRR-RRR-RRR
WHIRRRR
THUMPTY THUMP
RRR-ROWRRR
CLUNK
WHIRR
RATTA-RATTLE-SHAKE
THRUM, THRUM, THRUM
DING
SPLASH!
I’ll stop there . . . you’ll have to read the book to understand what SPLASH! is about! I imagine that Mike Dawns must have actually been on an airplane ride when he wrote the first draft of this book because the sounds so perfectly represent what happens step by step on an airplane. In this case, the onomatopoeias really are the story. The sounds hold the story together and they existent to help us feel like we are there on the plane experiencing the entire event. 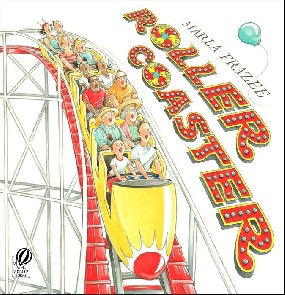 In Roller Coaster, Marla Frazee uses fewer onomatopoeias, but is still able to provide the reader with the sounds and feelings of riding on a roller coaster. The onomatopoeias include:
Clickty, clackity. Clickity, clackity.
WHOOSH!
WHEEEEEEEEEEEEEEEEEEE!
Both Dawns and Frazee used text caps and/or italics to further emphasize their onomatopoeias. This isn't required, of course, but does add interest to the text and affects how the reader reads the text.
Onomatopoeias aren’t just sounds, they are also sensory details. In Welcome to the Green House by Jane Yolen and Laura Regan onomatopoeias are sounds, sensory details, and help to describe the setting.
And this is not a quiet house,
Not in the day:
With the a-hoo, a-hoo, a –hoo
of the howler troop
welcoming in the dawn;
with the crinch-crunch
of long-horned beetles
chewing through wood;
with the pick-buzz-hum-buzz
of a thousand bees
droning over flowers;
with the high chitter-chitter-rrrrr
of the golden lion tamarin
warning off intruders;
with the kre-ek, kre-ek, kre-ek
of keel-billed toucans
feeding on ripe, sweet figs;
with the sniff-sniff-sniff
beneath the fig greet
where the wild pig picks
through the fallen fruit.
From: Welcome to the Green House by Jane Yolen and Laura Regan, p. 18-20

Onomatopoeias can also be used to describe characters, give insights into an event, and provide background information. Consider this example from the wonderful book, Mr. George Baker:
See these crookedy fingers,
going tappidy on this knee?
They fly across his knees.
Tappidy-boom.
Tappidy-boom.
Tappidy-boom-boom-tap.
George Baker is a drummer man, and
some people say he’s famous.
From: Mr. George Baker by Amy Hest and Jon. J. Muth, p. 19
In case you think onomatopoeias are only used in picture books, pick up almost any middle grade novel and you’ll most likely discover onomatopoeias (especially in certain sub-genres of boy books that include lots of bathroom humor). Graphic novels often use onomatopoeias, also. Ralph Fletcher would tell us that onomatopoeias aren't just child’s play . . . they are one way writers can enhance the quality of writing and have fun doing so!
It’s Your Turn!
1. Learn more about onomatopoeias at http://www.examples-of-onomatopoeia.com/ . You’ll even find an alphabetical list of onomatopoeias at the site.
2. Grab two or three of your favorite picture books and see if they contain any onomatopoeias.
3. Now read through one of your manuscripts. Can you add an onomatopoeia or two to up the quality of your story?
Posted by Rob Sanders at 12:30 AM