Word Up!
Tuesday, January 25—Vivid Verbs
Ask any 4th grader at Jackson Elementary School to tell you the difference between a verb and a vivid verb and you’ll get an answer something like this: “A verb is an action word. But a vivid verb is an action word that puts a picture in your reader’s mind.” (Or at least they’d better give you that answer! LOL!)
This is what Georgia Heard has to say about verbs: “The most important part of a car is the engine. If the engine doesn’t work, then the car doesn’t run. When you’re writing, verbs serve the same function inside of a sentence as an engine serves inside a car. If your verbs are weak, then your writing seems a bit like a worn out car that’s on its last few miles. If your verbs are strong, then your writing is usually more power just like my car when it zips onto Route 95 every day.” http://www.scribd.com/doc/13092989/Verbs-Are-the-Engines-of-Sentences-for-Memoirs-030909
Let’s try something with verbs today similar to what we did with nouns yesterday. Take a look at this sentence:
Jose walked into the house.
Now reread the sentence substituting each of the following verbs in place of the word walked:
slammed
darted
charged
sauntered
danced
tiptoed
As I try out each verb, I see a different image of  Jose’s mood and I can even speculate as to what caused the mood. For instance:
Nathan slammed into the room. Nathan is boiling over with anger. He may even be doing that old trick of stomping in, slamming down his books, huffing and puffing, and waiting for someone to notice!
Nathan darted into the house. Ok, I think Nathan may be excited about something or he may be running from someone. (When I was a child I would have been running from my older brother, Butch. My kids at school can tell many stories about Butch since I write about him all the time.)
Nathan charged into the house. Now it seems that Nathan is moving with intent and purpose.
Nathan sauntered into the house. This boy doesn’t have a care in the world!
Nathan danced into the house. Maybe Nathan just got an A+, a homerun, a first kiss, the lead in Swan Lake, or it’s the last day of school and there’s reason to celebrate!
Nathan tiptoed into the house. From my personal experience this could only mean one thing—Nathan has just done something that’s going to get him in trouble!
Can you see the difference a verb can make? Now imagine if the verbs are amped up throughout an entire manuscript. To use Georgia Heard’s analogy, the engine would be purring on that manuscript!
One way I see how my favorite authors use vivid verbs is by keeping a running list as a read. I suggest you try it, too. As you read and hunt for verbs, you’ll find that not every verb needs to be vivid (that would get tiring for the reader), but when the action is important, the level of the verbs often goes up. 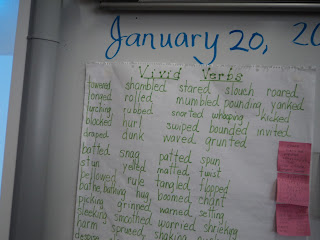 Vivid Verb list created by some of my students.
Two Verb Tools
The tools I most frequently use to help me make my verbs more vivid are an online thesaurus (my favorite is Thesaurus.com) and the Children’s Writer’s Word Book I mentioned in the last post.
Take a Look at These Verbs
I pulled three picture books from my shelf and went on a verb hunt. One book is a warm memoir/personal narrative, the other a rip-roaring rhyming book, and the third an award-winning literary piece. Guess what? All three authors used exceptional verbs throughout their books. 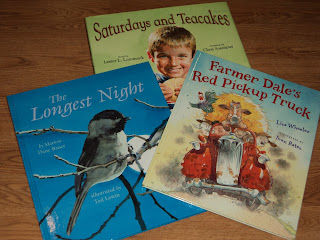 Saturdays and Teacakes by Lester L. Laminack and Chris Soentpiet
Every Saturday she spread a cloth over the red countertop and scattered a fistful of flour across it, sending a cloud into the air. Then she set out a big bowl.
Mammaw dipped a china teacup into the canister of flour, scooped out a cupful, and skimmed over the top with a finger. Then she dumped the flour into the bowl and added sugar from her black cookie jar. She let the mixture drift through her hands like I sifted sand at the beach. (p. 21)
Farmer Dale’s Red Pickup Truck by Lisa Wheeler and Ivan Bates
Farmer Dale’s red pickup truck
hauled a load of hay.
A bossy cow, with eyes of brown,
was standing in the way.
“How ‘bout a ride?” asked Bossy Cow.
“Hop in,” said Farmer Dale.
“Mooove over!” ordered Bossy Cow.
“There’s no room for my tail.”
The truck bounced up. The truck bounced down.
It spit and sputtered toward the town. (pp. 6-8)
The Longest Night by Marion Dane Bauer and Ted Lewin (Winner of the 2010 Gold Kite Award)
“Gone!” caws the crow, the night dark crow.
“So long the sun’s been gone.
I saw it slink,
I saw it sneak,
I saw it creep behind a cloud
and go to sleep.
But I’m the one.
I know how to bring back the sun.
I’ll fly with my strong wings
to reach the clouds.
I’ll poke with my sharp beak
and wake the sun.”
“Not you,” sighs the wind. “Not you.” (pp. 10-12)
It’s Your Turn!
1. Just like yesterday, go through one of your manuscripts and circle every verb. Make a running list of the verbs. Now, make those verbs vivid.
2. Go on a verb hunt of your own. Make a list of any five verbs. Now go to your thesaurus and find every synonym possible. Enjoy!
Posted by Rob Sanders at 12:30 AM

i love what the girl said about the verbs and the car.