Building A Story: Plots, Characters, and Settings—Oh, My!
Thursday, January 20—Characters
Alexander, Brown Bear, Curious George, Fancy Nancy, George and Martha, Horton, Madeline, Mike Mulligan, Miss Nelson, Olivia, Strega Nona, Wilfred Gordon McDonald Partridge, Yoko. The pantheon of picture book characters is long and distinguished. I have many favorite characters—some old (can you say the Pokey Little Puppy?) and some brand new.
Last summer at SCBWI, LA, the woman I was sitting by asked me about the book I was going to have critiqued the next day. As we waited for the session to begin, I shared the fill-in-the-blank statement I'd prepared and memorized: This is the story of three cowboys who more than anything want to celebrate Christmas¸ but can’t because they are stuck on the range until Santy Claus (who looks a lot like their cook, Cookie) makes a surprise visit to camp. When I finished she asked, “What are the characters' names?” I responded: “Darryl, Dusty, and Dub.”

The woman got that bless-your-heart look on her face and in a calm voice said: “That’s never going to work, you know. Holiday books don't sell. You can only have one character—not three—and the main character has to be a child—not adult cowboys--and the main character has to solve his own problem—no one can do it for him—and “they” never want names that are alliterated.” She paused and I fully expected her to take hold of my hand and lead me in a prayer of repentance. Needless to say, I was a bit discouraged.
Less than 24 hours later, an editor had expressed interest in the book. The changes she wanted had nothing to do with what the woman told me. The editor loved the characters. She wanted more tension, suspense, and action in the story line. I say this to remind us that while there are rules and guidelines for character development that we need to learn, no rules are hard and fast. We have to know the rules/guidelines/ suggestions so if we break them we do so with full knowledge of what we are doing (and we have to be willing to accept the consequences, good or bad).
I’ve been trying to gather up the “rules” for characters as I go along. Here are some (and there are surely more I’ve not discovered):
·        One main character per book
·        Main character is almost always a child
·        If not a child, an animal
·        If not a child or animal, an adult with a childlike quality
·        The main character has a problem (which is a big deal to him/her)
·        At first, the main character attempts and fails to solve the problem
·        The main character eventually solves his/her own problem
·        Main characters are relatable and likeable (at least on some level)
·        Main characters are active
·        Main characters are flawed (who can relate to the “perfect” kid?)
Of course, the main character is the protagonist: the leading character, hero or heroine. But I like Steve Barancik’s definition of protagonist: “The character to whom the events of the story mean the most.” Additionally, a character “needs to charm and intrigue readers if they are going to engage with it.” (The Encyclopedia of Writing and Illustrating Children’s Books, p. 32)
Your stories will no doubt have additional characters. Here are a few tips:
·   Secondary characters serve to move the action of the story or add to the conflict
·   As Lisa Wheeler says, “A character has to earn his/her name.” So unless the secondary character is essential to the plot, no name is needed. (You can refer to that person as the teacher¸ the shop keeper, etc.)
So where do characters come from? Anywhere and everywhere I suppose. I like to think I’m creating my characters from scratch, but often they have one or more of my personality traits or characteristics. Sometimes I’ll see elements of a friend, a foe, a relative, a former teacher, or someone I met in passing cropping up in characters. Many times characters develop organically as we write. Other times, writers speciifically plan every detail about their characters. (This seems especially true with the MG and YA writers I’ve met.)
Often writers will build a character profile of their characters (or at least a main character). For instance: 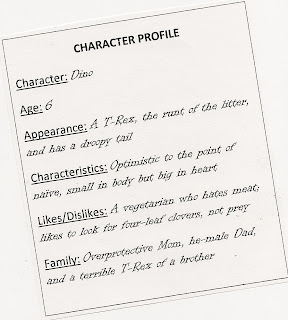 I usually don’t develop profiles like this (maybe I should). I do keep lists of things I’ve said about a character in the text or in illustration notes so I can make sure I am being consistent and to insure continuity throughout the manuscript.
What great characters are lurking in your mind? What characters have you already chased from your mind onto paper? Bring those characters to life. Flesh them out. Make them real. Let’s add some of our characters to the pantheon of great picture book characters!
IT’S YOUR TURN!
1. Create a profile for a main character in one of your stories (or one still in your mind).
2. Make a list of your Top 10 Favorite Picture Book Characters. What attracts you to these characters? What do the characters have in common? What are their differences? How can these characters inspire and influence the characters you create?
Posted by Rob Sanders at 12:30 AM