Lists, The Rule of Three, and Repetition

Week of May 22—Pacing a Picture Book
Friday, May 27—Lists, The Rule of Three, and Repetition
As I was beginning to write today’s post, I decided to randomly select a picture book from my bookshelf to see if I could find the three pacing examples I want to discuss—lists, the rule of three, and repetition. And what did I pull off the shelf? Hogg, Hogg, & Hog by Margie Palatini. 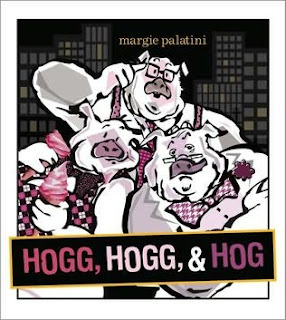 Leave it to Margie to sum up all three of my points in her title! Throughout the book I found examples of three points on page after page. For instance:
IN THE MIDDLE OF
THE BIG CITY,
ON THE TOP FLOOR OF
THE BIGGEST BUILDING,
IT’S BIG BUSINESS AT . . . (p. 3)
Notice the list of three things, notice the repetition of the word big/biggest three times. Even though commas separate these phrases, I find myself pausing after each comma and then continuing, like a reporter or the voiceover on a movie trailer. Lists, the rule of three, and repetition created that pacing.
Pacing with Lists
Writers uses lists for many purposes: adding details, summing up info in a condensed space, and for pacing. I gave some examples of lists used for pacing in yesterday’s post. One additional example of a list being used to speed up pacing comes from Scarecrow by Cynthia Rylant and Lauren Stringer:
Yes, birds. Crows, grackles, starlings, jays. Ask them how they feel about a scarecrow, and they’ll say, “Lovely.” (p. 8)
The Rule of Three
Good things come in threes in picture books. A triad of words or phrases is pleasing to the ear and gives a feeling of completeness. One less and you feel unsatisfied, one more and it feels overdone.
“OINK! What an idea!”
“Amazing! Genius! Brilliant!”
“Hogg, Hogg, or Hog . . .
how did you think of OINK?” (p. 11)
The rule of three usually causes the pacing to slow a bit as the reader emphasis each word. I find myself slowing down in both of the rule-of-three phrases above. Here’s another rule-of-three example:
Yes, Hogg, Hogg, and Hog were the most famous, fabulous, successful Big Pigs to ever leave the farm and make it in the BIG CITY. (p. 13)
Famous, fabulous, and successful are descriptive of the hog trio’s collective career and the list/rule of three makes me slow down and emphasize each word. (I want you to realize, too, that when we use the rule of three we are making a list, too. It’s a double duty craft! LOL!)
You’ll find more rules of three throughout the book: Sheep, Duck, Frog. AND Baa. Quack. Ribbit, for instance.
Here’s a gorgeous example of a rule of three from Scarecrow. What I love about this excerpt is that we’re not dealing with single words or phrases, but rather complete sentences that make the rule of three.
He has been with the owls in evening and the rabbits at dawn. He has watched a spider work for hours making a web like lace. He has seen the sun tremble and the moon lie still. (p. 17)
Did your reading slow down as you went from first one, then another, and then another sentence? The use of the rule of three caused the pacing to slow down.
Repetition
Did you notice in that last excerpt that not only was there a rule of three, but there was also repetition? Using the words He has to begin each sentence causes a rhythmic pace. Repetition is used extensively in picture books. A list could be considered repetition. The rule of three could be considered repetition. Our there could be outright repetition as in this excerpt from Hogg, Hogg, and Hog:
“OINK! What an idea!”
“Amazing! Genius! Brilliant!”
“Hogg, Hogg, or Hog . . .
how did you think of OINK?”
“When did you think of OINK?”
“Where did you think of OINK?”
“Why OINK?”
“Who OINKED first?”
“What’s the next BIG OINK?” (p. 11)
It’s no mistake that Margie Palatini used oink/oinked seven times on that page. That list, that repetition is intentional, or purposeful. Yes, purposeful repetition. Not just repeating things willy-nilly, but with purpose and intent.
Ok, I could go on forever pulling books from the shelf and pointing out lists, repetition, and rules of three that create pacing. But why should I have all the fun?
It’s Your Turn!
1. Go on a craft hunt! See what lists, repetition, of use of the rule of three you can find. Pause to note how these writing crafts impact the pacing of a story.
Posted by Rob Sanders at 12:09 AM

Wonderful posts this week, Rob! I'm keeping my own lists every time you use a book for an example, and then checking them out of the library by the armload. (But only in groups of three, of course... :)

Leslie, aren't you amazed at the number of great picture books out there? It can be intimidating, or motivating. I choose motivating . . . how about you?!

Great topic! I've used the rule of 3's in some of my mss. Some with success, some without (according to crits), but you wrote something that will echo in my mind the next time I use the rule of 3's: "Purposeful repetition. Not just repeating things willy-nilly, but with purpose and intent."

Oh, definitely motivating--not to mention delightful! Another fellow writer said she heard someone recommend that aspiring writers read one picture book a day. My response was, how can you possibly read only one, when they're so much fun? (Kinda like that old potato chip ad: betcha can't read just one!)