Week of May 1—He Said, She Said—Dialogue in Picture Books
Thursday, May 5—Dialogue and Action
For the most part, my method of writing instruction avoids rules. After all, writers who are all bound up with rules aren’t free to write. But every once in a while, I break my rule about no rules. Below is a poster showing one of my rules. 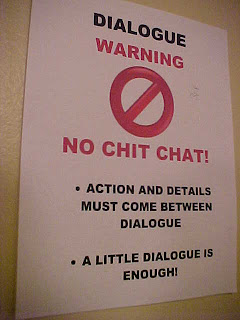 If you haven’t read a fourth grader’s writing lately (or listened to a fourth grader conversation), this is what it’s often like:
He said that I said that she said that I said he said it. Then she said if I said it how could he have said that she said it? And I said that’s what I’ve been saying. Do you feel me?
Some picture book writers fall into the same trap as fourth graders—they rely too heavily on dialogue to tell their story. Now you know my philosophy, “If you’ve caught it, you’ve got it,” so I guess it should go without saying that I struggle with ubber-dialogue syndrome, too. The editor who eventually purchased my book, Cowboy Christmas, said something like this about my original manuscript: “Page after page of cowboys sitting around a fire talking doesn’t sound very exciting. What do you suppose the illustrator would illustrate?” (I’m sure she said it quite nicely, but I remember it being about that blunt.)
A story has action with a sprinkling of dialogue. Granted, dialogue is often essential to understanding a character, it’s that character’s actions that bring the character to life.
As an example of the skillful combination of dialogue and action, let’s return to the popular Chicken Dance by Tammi Sauer and Dan Santet. When we last left Lola and Marge, they were heading to the talent show. 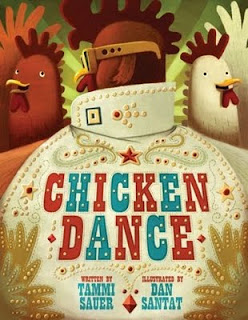 The chickens bumbled to the barn, found their seats, and settled in for the show.
The goats ate a tractor and scored a seven.
“Not bad,” said Marge.
The pigs formed a pyramid and scored an eight.
“I’ve seen better,” said Lola.
The cows jumped over the moon.
“That’s old!” said Lola. “We can still win this thing!”
Suddenly trumpets sounded.
The crowd gasped.
The ducks grabbed their boards and hit the water.
They scored . . .
. . . a nine.
The barnyard went wild.
Smirking at the chickens, the ducks flounced back to their seats.
“We’re on,” said Marge.
“We’re doomed,” said Lola.
The chickens shuffled onstage.
They blinked at the crowd.
And gulped.
From: Chicken Dance by Tammi Sauer and Dan Santat
Isn't that delightful? Just enough dialogue to keep us updated on how the characters are feeling, and then on with more action. This is also a perfect example of pacing in a picture book. No long descriptions, but quick, clippy writing. Take a peak at Tammi’s Mostly Monsterly for another example: 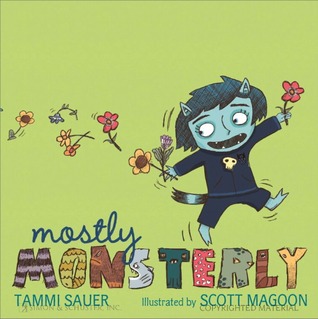 When it came time to go to school with other monsters, Bernadette felt a teensy bit nervous . . .
In Monster Moves Class, everyone practiced lurching techniques.
Except Bernadette.
“Group hug everybody!”
That didn’t go over so well.
During Creepy Noises Class, everyone work on growling skills.
Except Bernadette.
“Love me tender, love me true, I’m a Monster who loves you . . .”
Someone ate her microphone.
From: Mostly Monsterly by Tammi Sauer and Scott Magoon
Ok, I could do this all night, so I better stop while I can. But I think you get my point. Use dialogue like sprinkles on a cupcake—sprinkle on that dialogue, don’t douse the cupcake with it!
It’s Your Turn!
1. How about examining the dialogue and action in some of your picture book favorites? Type up the entire manuscript and note when and how dialogue is used and how it supports and is integrated into the action.
Posted by Rob Sanders at 12:30 AM