The Beginning of a Writing Career

Week of May 8, 2011—An Interview with Lisa Wheeler
Tuesday, May 10—The Beginning of a Writing Career
This is the first installment of a three-part interview with picture book author, Lisa Wheeler.
ROB: Lisa, thank you for joining us this week. One thing people always want to know about authors is how long they worked on their writing before they had a book published. What’s your story?
LISA: Like most writers, I’ve been writing all my life. But I didn’t get serious about it until I was 32. It took four years and over 225 rejections before I sold my first picture book.
(MINI-RECORDER IN ROB’S BRAIN: 225 rejections? Oh, man, it's time for me to stop complaining. I’ve not even sent out 225 manuscripts/queries.)
ROB: What was your first published picture book? How did you get it published? Was it a slush pile submission? A contact through a conference? An agented-submission? 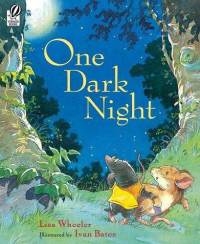 LISA: My first sell is like a Cinderella story. I had acquired an agent in May of 1998 based on a chapter book he liked. After five months, the chapter book still hadn’t sold. I was fearful that my agent would dump me.
About that time I wrote One Dark Night. I sent it to my agent and he immediately called me.  He was very excited by the book and wanted to orchestrate an auction for it.
On a Monday, he sent the manuscript out to four houses and they all made an offer. It was overwhelming.
After a few days, two of the houses dropped out. I was a total wreck. I wasn’t sleeping and I had a day job to go to. I asked my agent to wrap things up so I could eat and sleep again.
On Thursday he told the last two houses to have their final offer on the table. I chose Harcourt on October 30, 1998 (it was a Friday). I recall being worried that a mistake had been made and that on Monday morning I would receive a call from Harcourt or my agent saying that they changed their mind. I mean seriously, who gets nothing but rejection for four years and then has houses fighting over a book? It doesn’t happen—at least not in my world! Until it did.
(MINI-RECORDER IN ROB’S BRAIN: What a story. Do I have the writing fortitude to go through the process and wait four (or more) years to have an experience like this? In a phrase—I hope so.)
ROB: Lisa, what’s your writing routine?
LISA: What’s a routine?
(MINI-RECORDER IN ROB’S BRAIN: LOL! Yet another reason I love Lisa Wheeler. She’s a real person. I can relate to no routine and writing when I can in order to accomplish what I want to and need to.)
It’s Your Turn!
1. Reflect on Lisa’s comment: “Until it did.” That’s worth putting up on the fridge, the bathroom mirror, my car dashboard, in my wallet, and anywhere else I can think of. When doubts and attitude drag me down, I need to remember—“Until it did.” How about you?
Posted by Rob Sanders at 12:30 AM

Wow! What an amazing story. I love hearing about an author's journey from concept to contract!

Yes, Corey, it IS an amazing story. What fortitude to stick with it and getting going--don't ou think?!