Week of January 29, 2012—And the Winner Is
Monday, January 30, 2012—2012 Caldecott Award Winner and Honor Books
Each year The American Library Association Youth Media Awards present awards to authors and illustrators in numerous genres of children’s media. The Caldecott and Newberry Medal Awards are the oldest and most well-known of these awards.
The Caldecott Medal was named in honor of nineteenth-century English illustrator Randolph Caldecott. The award is presented annually to the artist of the most distinguished American picture book for children. [Blogger note: The award has nothing to do with the text—or lack of text—in a picture book. The award is only for the illustrations.]
CALDECOTT 2012 MEDAL WINNER 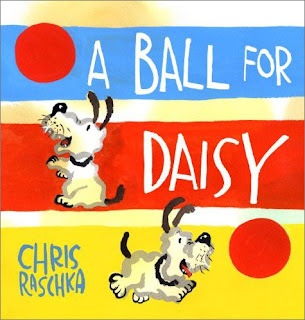 A Ball for Daisy
Illustrated by Chris Raschka
© 2011
Schwartz & Wade Books/Random House Children’s Books
A Ball for Daisy is a wordless picture book with colorful illustrations that use only a few colors. The story line is communicated through the pictures alone, and the reader can image the story to be anything he/she desires. Daisy is a little dog who loves her red ball, then loses it for a short while, and finds it again. Seeing Daisy’s emotions after losing her ball will tug at your heart strings. But don’t despair—there is a happy ending.
I’m cautious to call Raschka the author/illustrator of this book since there are no words in the book. Perhaps story teller/illustrator would be a more accurate description. And I would hesitate to say the book will hold the attention of younger readers as the Caldecott Medal Committee Chair, Steven L. Herb, said. This book is aimed at pre-readers and its strength is that it might enable children to infer what is happening in the story, without reading what is happening. None-the-less, the illustrations are poignant and lead the viewer through a tale that will make you smile and, perhaps, even shed a tear.
2012 Caldecott Honor Books 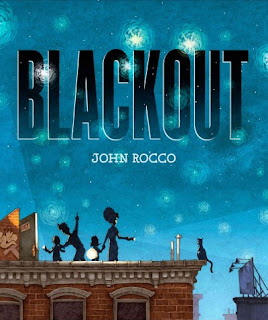 Blackout
Written and illustrated by John Rocco
© 2011
Disney-Hyperion Books, an imprint of Disney Book Group
On August 14, 2003, a massive blackout hit the East Coast. Fourteen million people in New York City alone were without power. Rocco’s stellar picture book tracks the blackout through the voice a young narrator. The blackout occurred at 4:00 p.m. but it wasn’t until the sun went down that the blackout was truly felt. The power outage brings one family to the roof top of their building and then out on the street where a street party ensues. Normally darkness is something children fear, but not in this blackout. Both in text and illustrations this is a treasure to behold and hold.
View a video at the book at http://roccoart.com/blackout.html. 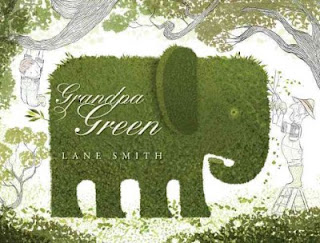 Grandpa Green
Written and illustrated by Lane Smith
© 2011
Roaring Brook Press, a division of Holtzbrinck Publishing Holdings Limited Partnership
To say I love this book would be an understatement. Smith writes a beautiful story, simply told then illustrated to show the rest of the story. The book tracks the life of one child’s great grandfather. We see the great grandfather’s life from being a boy who likes plants, to a boy who wants to be a horticulturalist, to a man who creates topiaries, to a man whose memory has faded but whose garden still reminds him of his life and loves. Lane’s illustrations are breathtaking and present multiple levels and layers of the story. The trailer for the book concludes with the statement: "For grownups to read to those still growing." Lovely.
View the book trailer at http://www.youtube.com/watch?v=UDbEfsdIGjI. 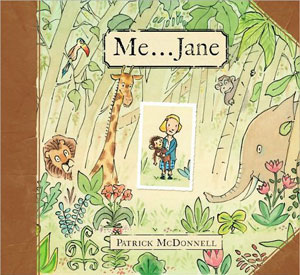 Me. . . Jane
Written and illustrated by Patrick McDonnell
© 2011
Little, Brown and Company, a division of Hachette Book Group, Inc.
This book tells the story of world-renowned primatologist Jane Goodall and her childhood friendship with her stuffed chimp, Jubliee. As she grows up, Jane observes the wonders of the world in her own backyard dreams of growing up to help animals everywhere. Of course, one day she grows up to do just that. The story is delightful, the illustrations in ink and watercolor are beautiful. This is a book that will have appeal to readers of all ages.
Posted by Rob Sanders at 1:00 AM

I noticed all four books here are by author/illustrators. Interesting...

And that wasn't the case last year. So it varies....