Week of April 3, 2011: Picture Book Poetry
Tuesday, April 5:  Structured Poems
When was the last time you wrote a Haiku or Cinquain? Chances are, it’s been awhile. I want to use these small, structured poems (and others like them) to force myself to choose the best words possible, to communicate ideas succinctly, and to use specific and sensory details. I don’t know if I will ever actually include any of these poems in a picture book, however. Even if I don’t, I think the discipline of writing structured poems on a regular basis could impact the overall quality of my writing.
HAIKU
Haiku is an ancient Japanese poem structure which usually includes 17 syllables. Haikus are most often written about nature. In her undated book, Aware: A Haiku Primer, Betty Drevniok says: “Write [Haiku} in three short lines using the principle of comparison, contrast, or association." Haikus usually follow this pattern:
Line 1 – 5 syllables
Line 2 – 7 syllables
Line 3 – 5 syllables
Example:       Blackberry Winter
Final frost before seedtime
Pre-spring ritual
This sample is Haiku at its simplest and I’m not trying to consider/remember all the various rules you read about writing Haiku. I’m not stressing over punctuation or capitalization either. What I am doing is reaching for the best words. Believe it or not the seventeen syllables above were revised eight times. I began with this:
Spring is here again/Flowers bloom pretty colors/Lovely smells everywhere. Then I started searching for clear focus, better imagery, and for words to clearly represent my ideas. I also tried to include an element of comparison, contrast, or association. 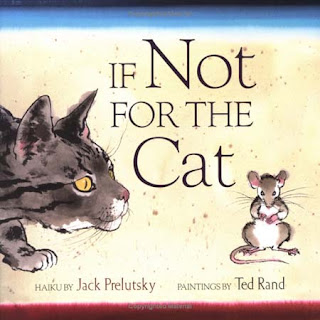 If Not for the Cat by Jack Prelutsky is a picture book featuring seventeen haikus about animals. Here’s an example:
If not for the cat,
And the scarcity of cheese,
I could be content.
Ted Rand’s illustrations pull the Haikus together into a seamless book. You can view the entire text at
http://www.harpercollins.com/browseinside/index.aspx?isbn13=9780060596774.
TANKA POETRY
Before there were Haikus, there were Tanka poems. Tanka is the original Japanese poetry form and consists of five lines. Tanka is more than 1000 years old. Any educated or cultured person in Japan would write Tanka poems as a way of showing appreciation for the things around him or her. Here’s the basic guide for writing a Tanka.
·   Line one: Five syllables
·   Line two: Seven syllables
·   Line three: Five syllables
·   Line four: Seven syllables
·   Live five: Seven syllables
Because Tanka has more lines than Haiku, the form allows the poet more opportunity to paint a word picture. The subject matter for Tanka poems is less restrictive than Haiku, but traditionally the subject matter was love. Later, nature themes became more prevalent in Tankas.
Traditional Tanka poets often chose paper and ink that matched the mood of their poem and sent each poem along with a flower to the person for whom it was written. (Adapted from Writer’s Digest, April 2007, page 92.)
Below are three of my Tanka attempts:
Lapping ‘round my legs
Then pushing back out to sea
Droplets of water
Cling and glisten on my skin
Ocean waters call to me
One crimson red rose
Holds its head up to the sun
Swaying in the breeze
Sending its fragrance skyward
In a springtime dance of praise
Your obnoxious breath
Your tangled hair—what a mess
You slurp when you drink
You have gas after you eat
But you’re my dog—I love you
I see some possible uses for Tanka in my writing. The length allows me to say more and the structure doesn’t stand out in quite the same way as in a Haiku. Maybe I could tuck a Tanka in here and there in a piece of writing or even use the format throughout an entire manuscript.
CINQUAIN
The word Cinquain is derived from the French word cinq meaning five. The form of poetry was actually created by American, Adelaide Crapsey. I’ve always thought of Cinquains as five lines with eleven words. However, some poets are more specific and say there are a prescribed number of syllables per line. I’ve never written Cinquains counting syllables, but you might want to research the topic and try it yourself. The five-line format I always use is:

Since a thunderstorm is raging at the moment, I’ll use that as the subject for my example.

At http://ettcweb.lr.k12.nj.us/forms/cinquain.htmyou can instantly create a Cinquain and print it out.

An example:
Pencil
Sharp, skinny
Writing, answering, erasing
Wood, lead, ink, plastic
Drawing, smudging, leaking
Durable, comfortable
Pen
Let structured poems help you with word choice, imagery, comparisons, and more. Carefully choose your words to communicate your message. Then let your poetic experience impact your writing.
It’s Your Turn!
1. Try your hand at a structured poem or two.
2. Add one or two of your poems to the “Comments” section of this post for others to enjoy!
Posted by Rob Sanders at 5:41 PM