This post is part of a series of posts sponsored by SCBWI Florida Tampa Bay area writers. We invite you to join us in this online book study of THE WRITER’S JOURNEY: MYTHIC STRUCTURE FOR WRITERS, Third Edition by Christopher Vogler.


In his introduction to the third edition of The Writer’s Journey, Mythic Structure for Writers, Christopher Vogler says, “All stories consist of a few common structural elements found universally in myths, fairy tales, dreams and movies. They are known collectively as The Hero’s Journey. Understanding these elements and their use in modern writing is the object of our quest.”


For Vogler, the quest started with his love of the Little Golden Book fairy tales his grandmother and mother read to him. This led to an impressive career in the movie industry. Along the way he encountered Joseph Campbell’s The Hero with a Thousand Faces and used Campbell’s concept of The Hero’s Journey to analyze blockbuster films. Not long after he presented his findings, Hollywood adopted The Hero’s Journey as a storytelling guide.


Vogler believes people are drawn to stories that replay the hero’s mythic journey. He also sees it as a guide to life. It is, he says, “a complete instruction manual in the art of being human. A set of principles that govern the conduct of life and the world of storytelling the way physics and chemistry govern the physical world.”


The Hero’s Journey theory has been tested on films, from animation to big budget movies. Vogler has traveled the world teaching story construction, facing challenges from herophobic cultures and critics who condemned The Hero’s Journey as formulaic and dominated by male warriors. He argues the list of possible heroes is endless: male or female, pacifist, mother, fool, lunatic, coward. He says The Hero’s Journey should be used as a form, not a formula. It is meant to be absorbed and recreated, not copied.


Vogler sees his concept as an ever evolving tool. In the appendix, he introduces some of what he’s learned in the years since publishing the third edition of The Writer’s Journey, including segments on polarity, catharsis and body wisdom. I was intrigued by his idea that good stories affect more than one organ. He says if there’s no physical reaction to the readers’ body, the story is only connecting with the intellect. I don’t know about you, but that makes me want to skip to the appendix and read more! First things first. 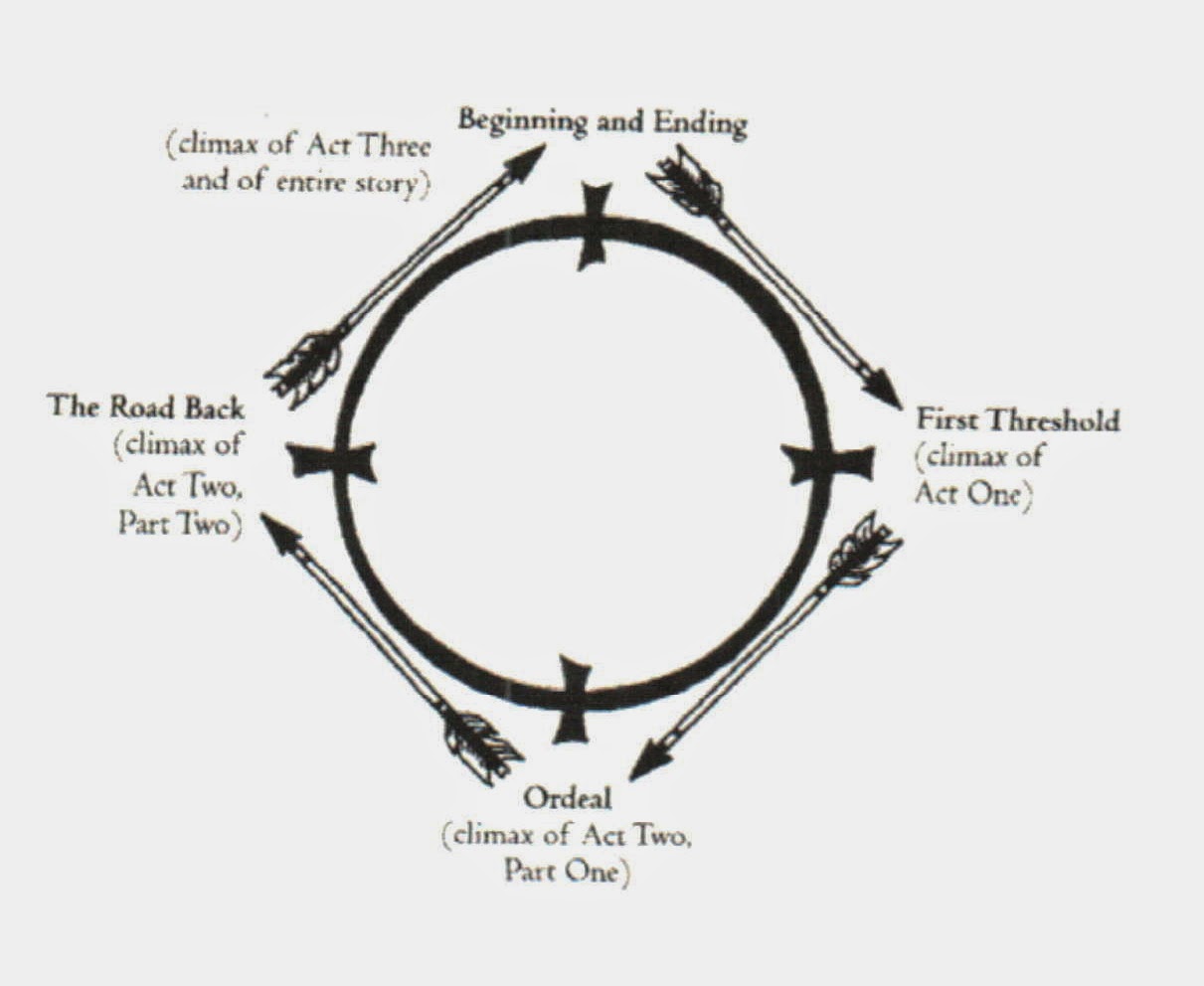 In Book One of The Writer’s Journey, we explore The Map of the journey through the world of story and meet eight of the many archetypes: Hero, Mentor, Threshold Guardian, Herald, Shapeshifter, Shadow, Ally and Trickster. Book Two introduces the twelve stages of The Hero’s Journey, from Ordinary World to the hero’s Return with the Elixir. In the epilogue, Vogler analyzes films and offers advice against story writing pitfalls. Adorning this post and heading each chapter are beautiful tarot-like illustrations by Michele Montez, an artist Vogler met while creating manga.


I chose to do a broad overview of the introductions and preface in case, like me, your eyes glaze when you see too much text on blog posts. But I encourage reading the material, especially the preface where Vogler speaks of his critics, cultural differences he’s experienced and America’s possibly negative influence on worldwide storytelling.


To end, I’ll leave you with a taste of Vogler’s style. Comparing editing to building boats, he says, “The spine of the story is like the keel, the major plot points are the ribs, and the individual scenes and lines of dialog are the planks and rigging that complete the vessel, a vehicle that you hope will sail the seas of public attention.”


Meet Today’s Contributor—Susan Banghart
Susan Banghart is an artist and writer of YA novels, a 2010 winner of the Highlights fiction contest and was awarded Honorable Mention for best YA writing at Eckerd College’s 2013 Writers in Paradise Conference. But what she’s most proud of is being a former member of Rob Sanders’ Picture Books and Java and a current member of Teddie Aggeles’ Skyway Writers, two of the best critique groups on the planet. Susan has a website and blogs at susanbanghart.com.

Thanks Susan and Rob. This is just what I needed as I'm rounding the corner from Ordeal to Road Back...new terms to me, but exactly where I'm at in my story!