Something to Crow About: Bawk & Roll

Thursday, April 5, 2012—Something to Crow About: Bawk & Roll
This is the fourth installment in a five-part series with author, Tammi Sauer, and illustrator, Dan Santat, in celebration of the release of BAWK & ROLL.
Today we’ll learn about the origins of BAWK & ROLL, the challenges and opportunities of a sequel, and what’s new with Marge, Lola, and Elvis Poultry. 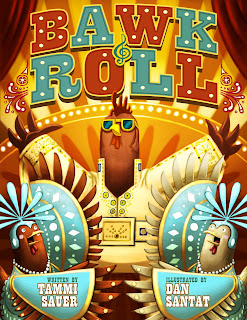 Rob: When did you know there would be a sequel to Chicken Dance?
Tammi: I am not exactly sure when it was decided that a Chicken Dance sequel was a go. I do remember asking Dan if he'd be interested in a sequel. Once he said yes, I brought up the possibility with my editor. She was all for a sequel. From that point, I started brainstorming story possibilities. Before I wrote a single word, though, I knew one thing for sure. This book was going to be called Bawk & Roll.
Dan: Tammi had told me she was writing a sequel when we discovered how well the first Chicken Dance was selling upon release, so I knew it was only a matter of time before the publisher was going to give me a call.
Rob: Since you have experienced great success with Chicken Dance, what did you do to make sure the sequel would be just as special? Did you collaborate from the beginning? Did you brainstorm? Gives us the low down!
Tammi: Dan and I didn't collaborate on the manuscript. I knew I wanted this book to have the same energy and over the top kind of word play of Chicken Dance. I also knew I wanted to leave plenty of room for Dan's genius.
Dan: Tammi wrote the story. I was completely hands off because I was busy with other projects, but I trust her sense of humor and I’m really good at responding to her text with illustrations. It’s Tammi’s story, it’s really up to her to tell the story. I just try to make it pretty. I do actually feel that after the years that passed I had an opportunity to refine and improve my art style and I feel the art in Bawk & Roll is much more solid. 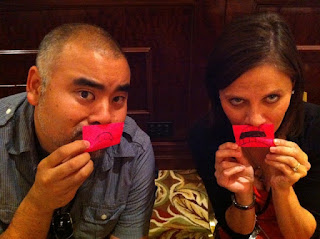 Rob: From each of your perspectives, what are the greatest challenges of a sequel? The greatest benefits/opportunities? How was the work on the sequel different than the work on the original book?
Tammi: The biggest challenge for me was coming up with a storyline that was different from Chicken Dance yet held true to the characters. The greatest benefit for me was having the opportunity to revisit the off-the-wall world of Marge and Lola. It may sound weird, but it felt a little like returning to the familiarity of old friends. Yes, I realize they are fictional chickens. But still. Don't judge me.
Dan: The biggest challenge is trying to make the public embrace this book with as much enthusiasm as the first. I’ve done many sequels in the past and I find that it’s difficult to convince people that what you’re creating is worthy of the first. At the same time it’s a benefit because you’ve already got a successful book out there so it’s not as hard to familiarize everyone with it. The work on the sequel, on my end at least, has been a little easier. The publisher became much more comfortable with my design abilities after the first book that they were very open to my approach to the second, while at the same time, I’ve developed much more as a competent designer and my work is much more solid.
Rob: What do you love about Bawk & Roll? Any secrets in the manuscript or illustrations that you can tell us? (Like the clever chicken shadow on the poster in Chicken Dance.)  What makes you chuckle, smile, or laugh out aloud about the book?
Tammi: I loooove that Dan made Elvis Poultry a bit of a diva. The King of Bawk & Roll has a stylist, a masseuse, and a beverage-toting pig at his disposal.
Dan: The book covers for both Chicken Dance and Bawk & Roll are easily my favorite covers that I have done in my career so far. The author/illustrator photos are also my favorites. I remember Tammi making one comment about how I made Elvis Poultry a total prima donna. There is a scene in Bawk & Roll where he is sun tanning on the roof of the tour bus and a pig it holding an umbrella over his iced tea. I just imagined a rock star (especially one who would be a sequin jumpsuit wearing rooster) to have a very “cocky” attitude. I will also say after these last two books (especially Bawk & Roll) that I am completely sick and tired of drawing cows.
Rob: What are your plans for marketing Bawk & Roll? Any collaborative efforts? A trailer? Conference appearances? Song and dance videos?
Dan: I was hoping to make a quick spoof video with my chicken puppet to promote the book. I don’t want to spoil the spoof, but I think Ryan Gosseling fans would get a good kick out of it. We’ll see if I have time. I think I should.
Coming tomorrow: Shaking Their Tail Feathers: What’s Next for Tammi and Dan?
Posted by Rob Sanders at 1:00 AM