Week of April 1, 2012—BAWK & ROLL WITH TAMMI & DAN
Tuesday, April 3, 2012—The Rooster: Meet Dan Santat
This is the second installment in a five-part series with author, Tammi Sauer, and illustrator, Dan Santat, in celebration of the release of BAWK & ROLL.
Today we’re visiting with a Dan and learning how he got his start as an illustrator, his creative process, and his advice to other picture book illustrators. 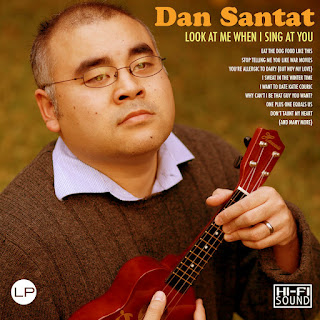 Rob: Dan, thanks for taking the time to join us for this interview. Tell us about your journey to becoming a world-famous picture book illustrator. How did you get started? When and how did your career take off?
Dan: All my life my parents wanted me to be a doctor. It was hardwired into my brain that it was going to be my goal in life because was I never given any other option. My parents never let me take any formal art classes when I was growing up. But I loved to draw and I was always copying pictures of things I liked to read such as Garfield and super heroes to a point where I realized that I had some sort of ability to draw to a degree that was somewhat respectable.
Nevertheless, I graduated from a four-year college with a degree in Microbiology and got admitted into dental school. Though it was never really my passion, it was just the next step in life that I thought I had to do. In my last quarter before graduation, I walked through a job fair and I saw a booth for an art school in San Francisco and, thanks to the support of all my friends, decided that I would regret not trying to apply to an art school and pursue a career in art. So in ten weeks, I threw my first portfolio together, and I applied to the Art Center College of Design.
Much to my surprise, I got accepted, and to a much greater surprise my parents were almost immediately supportive of my decision to go. Two and a half years later I graduated with a degree in illustration and one year later I attended my first Society of Children’s Book Writers and Illustrators conference in Los Angeles. It was there I got my first two-book deal with Arthur Levine Books. Arthur Levine himself plucked my portfolio and my first dummy book out of the illustration portfolio showcase. Not exactly the career struggle you might expect, but more of a self-discovery of going after what you are passionate about despite where you think life tries to lead you.
Rob: Dan, describe your work process. How do you decide which manuscripts to illustrate? What is your process when you begin illustrating a new project? How do you generate ideas? How long does it take you to complete the illustrations for a picture book? How many manuscripts are you illustrating at once?
Dan: Early on I used to accept any manuscript that came my way because I needed the work and I wanted to build my reputation as someone who could do a good job illustrating books. Now, I’m a bit more selective because I realize that there are certain manuscripts that I really connect with and I have a lot of fun illustrating. Usually, when I find the perfect script, I tend to picture the entire book in my head. It’s not just images that go with the text. I envision the cover, the jacket flaps, the endpapers, and so forth.
I try to design as much of the book as I can so that the entire book feels cohesive. I don’t usually experiment with many sketch ideas. I usually think about a manuscript so much that at a point it becomes clear in my mind and I just go right to tight sketches. Once the sketches are approved, I then go to color final from that tight sketch. A spread per book usually takes me one day per two-page spread and I can usually complete an entire book from sketch to finals in about two months.
My ideas generally come from things I read or things I see which inspire me. I often find that my ideas start with a single sentence which ends up being the pitch line to a particular book and then I heavily outline from there. If the one-liner doesn’t inspire me then I just keep thinking up new one-liners.
In this past year I illustrated seven manuscripts and at one point I was juggling four manuscripts at the same time. It was insanity and I don’t plan on doing that ever again. My agent has also assured me that she won’t allow it.
Rob: What is a typical work day like for you? (Is there such a thing?) 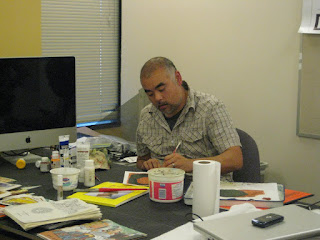 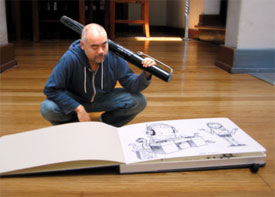 Dan: I think my biggest strength is the ability to visualize an entire book as a whole, or at least, attempt to tackle as much of the book as I can. I strongly feel that the design and flow of a book as a whole is just as (if not more important) than how beautiful each individual illustration is. To read a manuscript and identify with the theme and then execute a design which matches that theme just helps emphasize the message of the story. I love typography but I’m not as strong at it as I would like to be. There are some type designers and graphic designers who are simply amazing at it and I just continue to learn and experiment with each new project I receive.
Rob: What three things have you learned that illustrators breaking into the picture book biz need to know?
Dan: First of all, I have to start off by saying is that I hate networking and meeting art directors and trying to solicit my work. Personally, that experience for me feels like it’s less about wanting to get to know someone and more about trying to get something from someone for work and the whole experience feels insincere. I took the route of trying to expose myself as much as possible on the internet. Share your work with every site you can, and be consistent. So, my first piece of advice would be that if you’re not working on a paying job then just keep working to grow your presence on the internet. Just keep making art and be consistent about it. It’s that simple.
Second, you should share that work. Post it on your blog or Tumblr account be consistent about posting something every week. It’s the consistency as much as the quality of the work that keeps people coming back to see what you’re doing.
Third, I would advise a person to really focus on their art not for the sake of making a buck, but instead to fine tune your style until it really speaks about how you think and do things. If every illustration you do is money driven and you constantly find that you’re asking yourself, “Can I sell this?” then you’re not being true to yourself and your work is suffering because of it. When you constantly worry about being able to make a decent career in the arts many folks tend to rely on imitating the big names out there who are making a big splash with their work. More often than not, their own work suffers because it is derivative.
Rob: Any more advice for illustrators?
Dan: First, be diverse. The biggest flaw I see in many portfolios is that certain folks will draw too much of one thing or not enough kid related material. The problem with that is that so many art directors are under such tight deadlines that they are very specific in their pursuit of an artist. If you show a wide range of things in your portfolio (and I mean images not styles) then you will give the art director confidence in knowing that you would be capable of handling their particular project because you demonstrate your abilities in a wide range of subjects.
Second, don’t just illustrate the text, Try to tell more of the story, but not to the point where it is completely different from the text. Try to take the work one step further. That’s your job.
Third, always do your best work. This means, always continue to learn new things and apply it to your work. Some folks also tend to settle after a while. They either feel like they don’t want to improve.
Visit Dan’s website at: http://dantat.typepad.com/dantat/
Bawk & Roll by Tammi Sauer and Dan Stanta is now available! Flap on over to Amazon.com or your favorite book store and scratch up your copy today!
Coming tomorrow: Struttin’ Their Stuff: Meet Marge and Lola
Posted by Rob Sanders at 1:00 AM

I love your work, Dan. Thanks, Rob, for the interview!

Nice words of advice , Dan. I am shocked at how our daily schedules are almost exactly the same, except I'm on EST.

Super interview and great advice from one of my favorite illustrators!

Dan IS the man!

Wonderful interviews of Tammi and Dan! Great insight into the life of an illustrator. Thanks, Rob, for this series.

Thanks so much for the advice, Dan. It's excellent.