The Power of Distraction

Week of March 18, 2012—LIVING AND WRITING IN BETWEEN
Tuesday, March 20, 2012—The Power of Distraction
When I told my critique friend, Dionna, that I was in an in-between time in my writing, she was surprised. “But you always have new ideas and you’re always writing,” she said. That’s mostly true. But writing something that I connect with, and somethingI think my agent will connect with, and something I think he can attract an editor to connect with can be daunting sometimes. I can write a lot. But it doesn’t mean I am writing what I should be writing, want to be writing, or need to be writing.
For some time now I’ve had a picture book character in my mind. I’ve written a detailed character description of her, changed her name two or three times, and written paragraphs and scenes about her . . . but I haven’t been able to write a story with her as the main character. It’s because I’m in-between. I’m in between projects I’ve written and loved and the time when I find out if someone else loves them, too. And I’ve been stuck. Have you ever been there?
This past week was spring break and I wrote lots and lots and lots. But that character still was out there and I had nothing to write with her as the star. On the last day of spring break my sister and I drove to Sanibel Island to meet our cousin, Jacqua, and her husband, Kevin, who were just beginning their spring break vacation. As soon I’m around my Missouri relatives, I start feeling more countrified. I talk with more of a drawl. I tell lots of stories like our family members always have. 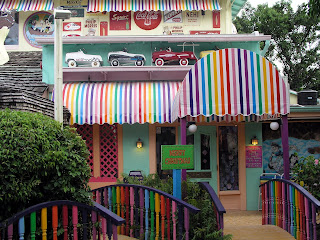 Jacqua insisted we visit two restaurants for dinner. At the Mucky Duck I ate barbequed shrimp wrapped with bacon, garden vegetables, and red potatoes roasted in butter. Down the street was a restaurant named Bubbles. Jacqua led us there for after-dinner appetizers and dessert. She ordered Bubble Bread (a bubbling, cheesy, dough mixture) and Sticky Buns. We sat at a picnic table eating our appetizers as the sun set over the gulf. Then we ordered cake. Fortunately, Jacqua anticipated we would be full by this point, so she had brought a cooler along so the icing on our cake slices wouldn’t melt. 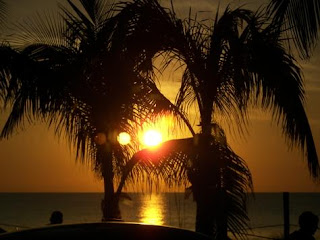 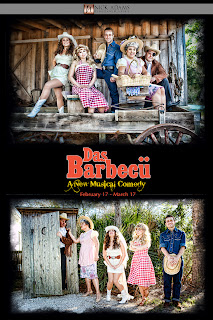 Then we were off to the Herb Strauss Theater to see Das Barbecu, a musical-comedy set in Texas with a Wagneresque story line and five actors who played thirty roles. It was a hoot. I got home around 1:00 a.m. and couldn’t stand it any longer . . . I had to eat my slice of Red Velvet Cake from Bubbles.
So what’s the point? Well, the point is that on Sunday I outlined the story for that character who had been haunting me for so long. And I drafted the story later that day. All the distractions of Saturday (and immersion in some Midwestern, beach-y, and Texas-style culture) had gotten me over that bit of in-between-ness . . . at least for the time being.
Find a distraction, whatever it might be. Try dinner out, watching people at the mall, gazing at airplanes as they land, or visiting with old friends. Do something. Take yourself out of the routine of in-between-ness. I can’t guarantee that you’ll find yourself suddenly on the other side of your situation, but you will have rejuvenated your psyche, aligned your chakras, given yourself some breathing room, and otherwise made life a little bit better for yourself.
Go on, now. Go distract yourself.
Posted by Rob Sanders at 1:00 AM

Thanks for this, Rob! I have always viewed distractions as a bad thing. Now I'll make sure to keep my eye out for well placed distractions when I need to be unstuck.

Robin, I hope you get distracted in a good way soon!