Week of February 20—Gathering Ideas
Wednesday, February 23—Ideas-in-a-Box
A couple of years ago I worked as a District Resource Teacher in my school district. The abbreviation for our job was DRT and we were affectionately called DIRT! I worked with elementary writing teachers throughout the district, modeled lessons, coached teachers, helped evaluate student writing, led training, and so on. I learned a lot that year and a lot of that learning came from watching and listening to other teachers.
At one school, I saw students using Writing Idea Boxes. The shoe boxes had been covered with personal photos and were stuffed full of personal momentos—ribbons and awards, letters and postcards, trinkets and doodads. Each box was different, unique to the student. When I quizzed a student about her box, she told me that when she was having trouble thinking of something to write, she went and got her idea box and looked for an idea.
The next school year my students and I made Writing Idea Boxes and used them throughout the year. I have gone back to that box over and over and over when I need an idea to write about. Remember, not everything we write is for publication. Sometimes we write for the enjoyment of writing, to practice the craft of writing, or to keep up the discipline of writing. However, those seemingly non-publishable writing chunks can lead into other works that could be sellable. 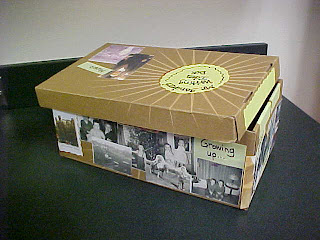 My box is covered with photos of my me as a child, my brother and sister, Granny’s farm, my parents, our cousins, photos of activities I was involved in when growing up and the activities that occupy my time and attention now, and of course there are photos of my dogs (past and present 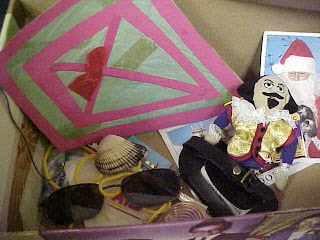 Inside the box I have a strange combination of items. Sometimes I take out some items or add something new to. The box can change, it didn’t be static. Some of the items inside my box include a:
·        Kite I made as a child
·        Photo of Baxter (my dog) with Santa
·        Luggage tug from travels
·        Sunglasses and a seashell
·        Postcards of favorite places
·        Beefeater finger puppet from London
Now, don’t think I’m crazy, but let me share with you a couple of other ways of gathering memories that can lead to writing ideas. Over a decade ago I took a trip to Israel along with a film crew. We were making educational videos for the company I was working for at that time. The trip was a rich experience in many ways. I gathered up postcards and souvenirs and took many photos. I ended up with a two-volume scrapbook of photos, maps, postcards, and more. 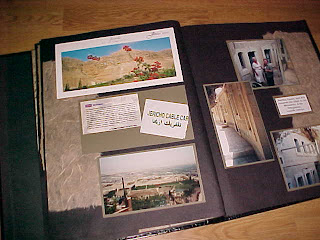 I also made a display of pottery artifacts I purchased (not shown) and physical items I collected—salt from the Dead Sea, acorns from Jericho, a candle used when touring Hezekiah’s tunnel, etc. These items are displayed so I can enjoy them and be inspired by them. 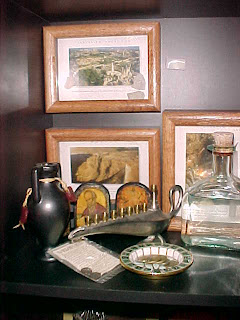 For the last couple of years I have worked off and on (more off than on) on a chapter book that is an adventure story set in Israel. These photos and physical items are the inspiration for the writing. They are the items I go back to when I need to see a scene, touch something physical to transport me back to the experience, or figure out a character’s next move.
Ideas from life surround us, yet the often are the last things we think about when it comes to a writing topic. Why not get in touch with your memories and see what ideas you can uncover.
It’s Your Turn!
1. Look through a photo album or box of momentos. See what writing ideas you can unearth.
2. Consider beginning a Writing Idea Box to serve as inspiration during those dry times when ideas just don’t seem to come.
Posted by Rob Sanders at 12:30 AM