Week of February 20—Gathering Ideas
Tuesday, February 22—Creating a Writer’s Notebook
When I met Deborah Wiles and followed her from session to session a few years ago, I noticed the thick, tattered notebook she carried with her. In one session she showed the notebook and talked about how she tracked thoughts, collected ideas, recorded dialogue, and so on in her notebook. What a treasure trove.
Another writer at the same conference talked about the files she kept—clippings from newspapers, photographs, recipes, letters, and so on. These items were her version of a writer’s notebook. Still another author showed the desktop of his computer and all the idea files he had stored there.
I keep lots of electronic files. I’m a collector of ideas for titles and have files and files of titles I’ve pilfered from plays, musicals, newspaper headlines, recipes, magazine articles, holiday concert “themes”, party ideas, even the names a cake decorator gives to his designs. These titles serve as an idea file. An electronic writer’s notebook of sorts.
Lillian Morrison, poet and anthologist, writes:
I have tons of notebooks into which I tend to throw everything—thoughts, ideas for books, early drafts of poems and letters, unfinished poems, dreams (including lines, phrases, or puns dreamed), passages from my reading that interest or move me, word lists, overheard bits of conversation, etc. Sometimes, when I need inspiration, I go back to an old notebook and a poem results. I always have a notebook next to my bed.
From: A Writer’s Notebook: Unlocking the Writer within You by Ralph Fletcher, p. 130. 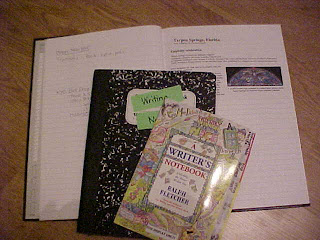 To writing teachers, Ralph Fletcher is the guru on writer’s notebooks. Fletcher’s book, A Writer’s Notebook: Unlocking the Writer within You, is used by teachers and students who are interested in learning how to create and use a writer’s notebook. Fletcher writes: “Keeping a writer’s notebook is one of the best ways I know of living a writing kind of life.” (p. 3) In Live Writing: Breathing Life into Your Words, Fletcher points out some of the advantages of using a writer’s notebook:
·        You can let go of what others might think about your writing
·        You can let go of worries about being graded
·        You can let go of judging yourself
·        Nothing is good or bad, stupid or silly
·        Write honestly, your notebook will be filled with the true you
·        Nobody can do you better than you can
From: Live Writing: Breathing Life into Your Words by Ralph Fletcher, p. 50.
I am still learning the discipline of keeping a writer’s notebook. My latest version of a writer's notebook is proving helpful. Not only am I recording title ideas, but lists of words, newspaper clippings and letters that could be story ideas, clip art and photographs, pre-rough drafts (you know, the notes you keep on napkins or scraps of paper), and more. I’ve given myself permission to draw, sketch, glue, staple, bend, fold, and mutilate the pages of my notebook anyway I need to in order to save the information I think is important. Neatness doesn’t count here. It’s not a scrapbook for public viewing. 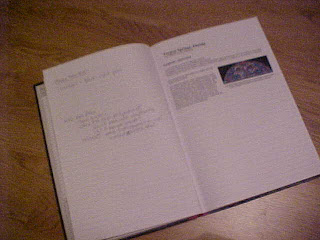 The writer’s notebook is a place to house ideas. To keep the noteook and add to it is a discipline in and of itself. But one of my goals this year is to keep AND use my writer’s notebook. I want to refer back to it, pilfer ideas from it, grab a word I've saved, and so on. I know that’s not a unique concept, but it is a realization (and a goal) for me.
It’s Your Turn!
1. Do you have a writer’s notebook? Are you actively using it? Do you need to start one? Today could be the day to start a new discipline or renew your commit to a discipline you've let slide.
2. Read Fletcher’s book A Writer’s Notebook: Unlocking the Writer Within You. Follow some of his advice. See what ideas you can generate and how your writing can be impacted.
Posted by Rob Sanders at 12:30 AM